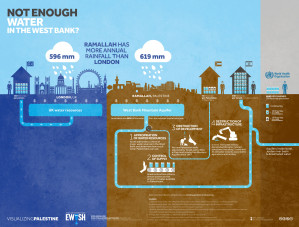 The Middle East is one of the world’s most water-stressed regions. It is therefore essential that water is shared equitably. Since its 1967 occupation of the oPt, Israel has completely controlled our water resources and deprived us of access to a sufficient share of water, in violation of international law. Instead, Israel has used our water resources for its illegal settlements and its own population, forcing our communities to purchase water from Israeli companies at high commercial prices.

The main sources of water shared by Israelis and Palestinians are (i) surface water, including the Jordan River and Wadi Gaza, and (ii) groundwater sources, or aquifers, lying under the occupied West Bank and Gaza Strip.

Since 1967, Israel has assumed near complete control over all our water resources, thus depriving us of our right to access and control one of our essential natural resources. Discriminatory measures adopted by Israeliauthorities include:

At the same time, wells for Israeli settlements, many of which are strategically located over areas characterized by high groundwater potential, are approved without delay and routinely drilled deep into the aquifer. Due to high pumping rates, these wells often dry up more shallow Palestinian wells located nearby. The consequence of much of this Israeli action has been to force our communities to purchase water, at a high cost, from Israeli companies.

Israel’s unfair use of our water resources continued uninterrupted during the Oslo negotiations. Under the 1995 Palestinian-Israeli Interim Agreement, we were, according to the agreement, to develop 70-80 million cubic meters (MCM)/year of water as additional quantities from the Eastern Aquifer and other agreed sources in the West Bank, as a temporary measure during the interim period only. This amount is itself far below a reasonable and equitable allocation of shared water resources. However, in practice, less than half that amount (24 MCM/year), on average, has been made available to us by Israel to date. Meanwhile, our population has doubled since the signing of the Oslo agreement, meaning that the water available to us, per capita, has fallen dramatically.

During the pre-Oslo period in which Israel was solely responsible for water-related issues in the oPt, Israel failed to invest adequately in water infrastructure to serve our communities. Since the signing of the Interim Agreement, Israel has consistently used the veto power to prevent us from undertaking projects designed to develop groundwater resources in the West Bank.

In addition to utilizing a disproportionate amount of water, Israeli settlements have caused significant environmental damage. Settlers discharge domestic, agricultural and industrial wastewater and solid wastes into nearby valleys without treatment. Polluting industries, such as aluminum and plastics, as well as waste disposal sites, have been transferred into the West Bank, particularly over the past 20 years as environmental controls in Israel have tightened. These practices threaten the quality of the groundwater and the surface water resources shared by the two parties.

The attainment of water rights and the fair allocation of water are required for a successful two-state solution and future political stability in the region. Water issues are linked to, and impact numerous other issues to be negotiated, including borders, settlements, economic relations and refugees, among others.

We must have control over and access to our water resources. We accept the principle of international water law stipulating that both Israel and Palestine are entitled to an equitable and reasonable allocation of shared freshwater resources, including those in the four main aquifers (Eastern, North-Eastern, Western and Coastal), the Jordan River, and Wadi Gaza.

Permanent link to this article: https://www.ambasciatapalestina.com/en/political/water/