Return to The occupation

In early February 2016 Palestinians launched a campaign to raise funds for the reconstruction of demolished family houses of Palestinians killed by Israeli police in Jerusalem since October, 2015.

Donation boxes were placed in well-trodden streets in the Jerusalem town of al-‘Izzariya, Bethlehem and Hebron to collect donations. In al-‘Izzariya, a town to the east of Jerusalem, the fundraising was kick-started by a press conference held at Yasser Araft Square. The event was attended by Christian and Muslim clerics.

‘Ali ‘Ubeidat, a local activist who helped organize the fundraising activity, said that other donation boxes were placed in Ramallah, Tulkarem, Nablus and Salfit and noted that this campaign marked the culmination of a month-long work to mobilize grass-root support for the reconstruction of demolished houses.

In Bethlehem, two donation boxes were placed in the well-trodden Manger Square and Cinema thoroughfare.

Munthir ‘Amireh, a local activist who helped kick-start the campaign, said that although the campaign seeks to raise funds, but it has also a moral significance. It signifies popular solidarity with the families of Palestinians killed by Israeli forces and sends the message that they are entitled to live. ‘Amireh added that the campaign signifies the Palestinian people’s unity and commitment to the issue of Palestinians killed by Israeli forces. He noted that 30 local activists would also collect donations from local businesses and stores.

Meanwhile in Hebron, donation boxes were placed at the Child Happiness Center and Ibn Rushd turnabout. Governor of Hebron Kamel Hmaid urged Palestinians to make donations and said that the campaign was motivated by national responsibility to reinforce the steadfastness of Palestinians, especially in Jerusalem. Such campaigns have become common since Israel resorted to punitively demolish the family homes of any Palestinians – as means of deterrence – accused of being involved in attacks against Israeli settlers or military, a policy that Israel does not use against Israeli settlers who were involved in fatal attacks against Palestinians. This policy was widely condemned by human rights organizations as “collective punishment” and “a war crime and a crime against humanity”.

Israeli media reported an Israeli outrage by the Palestinians donating money to rebuild the demolished homes of those who have been killed by IOF. According to Walla Israeli website, the Israeli army said that these donations are ruining the Israeli “deterrence policies” against Palestinian resistance.

The Israeli occupation authorities demolished around 97 homes and 86 facilities in the occupied West Bank in February 2016 alone under the pretext of “illegal construction”, according to a statistical report released Thursday by the Applied Research Institute Jerusalem (ARIJ). The Palestinian Institute also said that demolition orders and orders to stop construction were issued to a further 139 Palestinian houses and facilities. An estimated 653 dunums of Palestinian land in various parts of the occupied West Bank are currently facing confiscation orders.

“The occupation has used the demolition policy as a way to put pressure on the Palestinians so to empty the region classified as Area C in the West Bank,” Ghassan Doughlas, a Palestinian official who monitors settlement activity in the northern West Bank said. 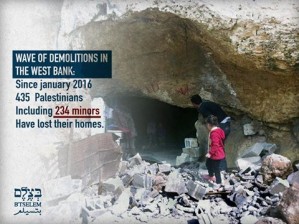 Hundreds of Palestinians participated in a protest organized in the Negev, south of occupied Jerusalem, in solidarity with the people living in the villages of Atir and Umm Al-Hiran whose homes Israel decided to deport and demolish. During the protest, Arab MK Taleb Abu Arar said: “What the Negev is experiencing is ethnic cleansing, not developments. All of the government plans aim to ethnically cleanse the area.”

At the same time, Kol Ha’ir, an Israeli weekly newspaper, revealed that the Israeli government is advancing construction plans to build about 1,000 housing units in four illegal settlements in occupied Jerusalem despite the stiff international criticism. The 1,000 housing units are scheduled to be built in Har Homa, Pisgat Ze’ev, Maale Adumim, and Modi’in illegal settlements.

Construction licenses are very expensive and difficult to obtain for Palestinians, notably in Jerusalem area, in a bid by Israeli authorities to force Palestinians out and change the demographic balance of the city.

According to Israeli rights group B’Tselem, almost 600 homes have been destroyed in the city over the last twelve years, leaving more than 2,000 Palestinians homeless in occupied East Jerusalem

Permanent link to this article: https://www.ambasciatapalestina.com/en/the-occupation/demolitions/